The winners of Mandarin language BP division of the 2011 IDEA China Debate Open recently visited New York City for a debate tour. The debaters, Zeng Haiqiang and Zhuo Hao from Sichuan University, not only had the opportunity to visit the tourist sites of the city, including the MoMA, the United Nations, and Times Square, but also were able to have public debates and interact with students and educators from a variety of backgrounds.

The main event of the week was a simultaneously-translated debate at Columbia University held in conjunction with Columbia's parliamentary debate team. Zeng and Zhou debated in Mandarin on the affirmative side against Jake Davidson and Katie Bentivoglio from Columbia, who spoke in English in opposition to the motion "When in conflict, economic development should take precedence over environmental protection." The debaters and audience both had headsets so that those who were not bi-lingual could understand the entire debate. The audience had many questions for Zeng and Zhou about their experiences with debate and their impressions of their trip thus far.

The Chinese debaters were also able to visit Bronx Science High School to visit with the debate team and have a roundtable discussion about debate. The Bronx Science team welcomed their guests and presented them with t-shirts from the school. Zeng and Zhou also visited classes of Professor Martin Schoenhals, an anthropologist and expert in Chinese education at Dowling College, and were able to discuss their experiences with Professor Shoenhals' students. Finally, the Zeng and Zhou were able to sit down and discuss relations between the two countries with staff members from the National Committee on US-China Relations. In an interesting hour-long discussion, the students were able to share their views and discuss them with experts.

IDEA would like to thank Martin Schoenhals, Denise Yu and the rest of the Columbia debate team, the Bronx Science debate team, the National Committee on US-China Relations, and Dowling College for participating in this unique event. We hope to see you all again next year!
Posted by alex.dukalskis at 9:21 PM No comments: 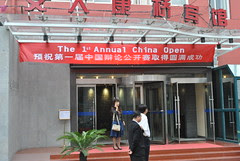 IDEA would like to remind everyone about the open call to host the 3rd annual IDEA China Open Debate Tournament in 2012. Previously Xi'an Jiaotong University (2010) and Northeast University of Qinghuandao (2011) graciously served as hosts for the tournament. As the tournament has grown in size and popularity, IDEA has been approached by various schools wishing to host the tournament going forward. In order to choose among these offers fairly, we feel that it is important to have an open bidding process.

We therefore request that any school interested in hosting the 2012 IDEA China Open Debate Tournament submit the following information to this year's tournament director, Robert Trapp (trapp@willamette.edu
Posted by Jumbo at 6:15 AM No comments:

Here are the results of the Karl Popper Debate Championships 2011!

Elimination Pairing Bracket
Posted by Marjan at 6:52 AM No comments:

Motion: All states should immediately ratify the UN Convention on the Rights of Migrant Workers and their Families
USA Hunter vs USA California
Posted by Jumbo at 8:09 AM No comments:

Videos from the third day of the #IYF11 KPDC!

Posted by Marjan at 2:21 AM No comments:

The list of teams that broke to octo-finals at the 2011 KPDC, are, in no particular order:

Videos from the second day at the IYF11!

Posted by Marjan at 3:15 AM No comments:

Videos from the first day at the IYF11!

KPDC Round #2: Bosnia vs Botswana

Posted by Marjan at 2:51 AM No comments:

Debaters from all around China (as well as a few from Korea, the US and Australia) arrived on Thursday, June 2nd and participated in IDEA-sponsored training on Friday morning and afternoon before competing in round 1 on Friday evening. Saturday saw four more preliminary rounds and Sunday featured quarterfinals, semifinals and grand finals for each division.

Given the high number of teams and speakers, it was quite an accomplishment to break into elimination rounds and to win a speaker award at this tournament.

Mandarin Speker Awards
Posted by Jumbo at 10:21 AM No comments: